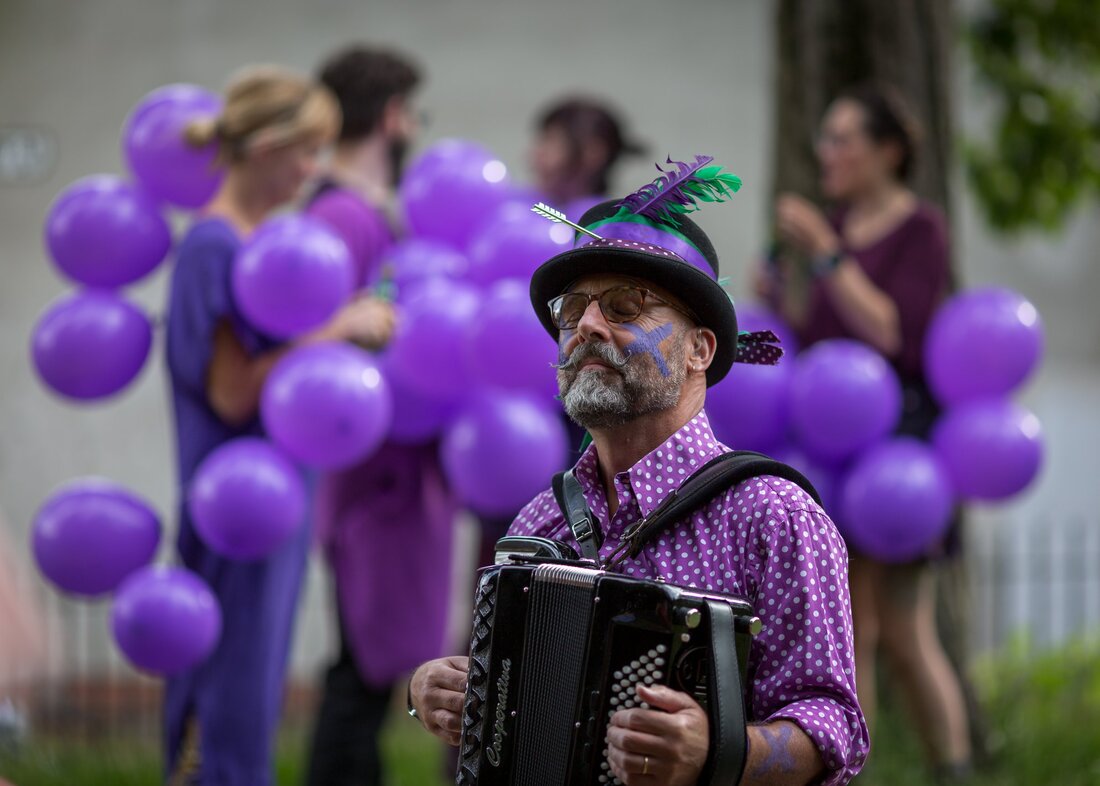 I organised the Six o'clock Saturday Sing Song in Hedley Villas Park in Nottingham during lockdown (we began in our yards and gardens, then moved out to the pavement outside our homes, then, as restrictions relaxed, into the park, socially distanced and in our bubbles...for which I was awarded TMC's Kevin Creative Creative Community Hero Award 2020 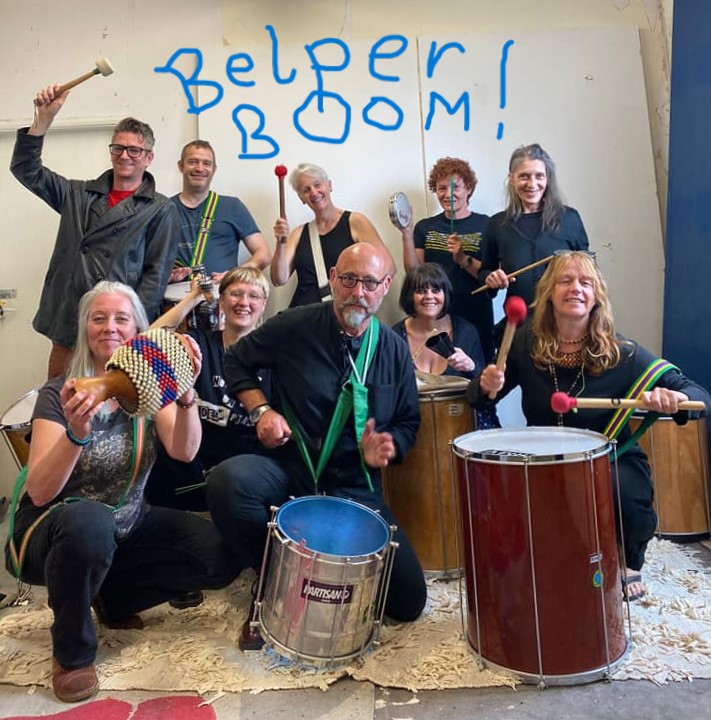 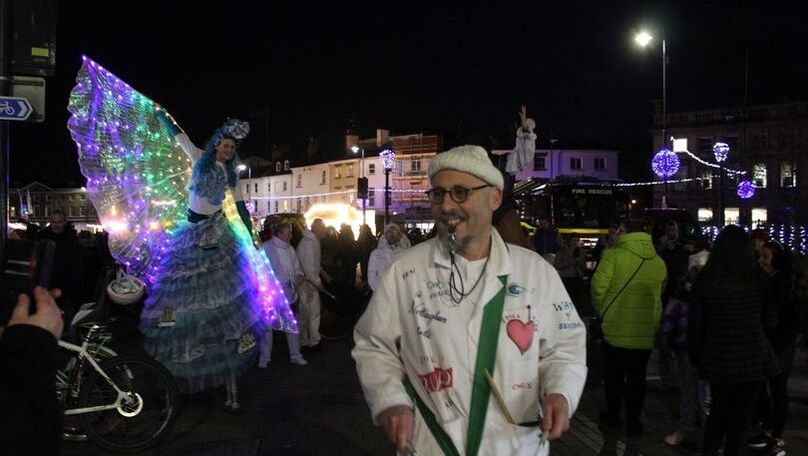 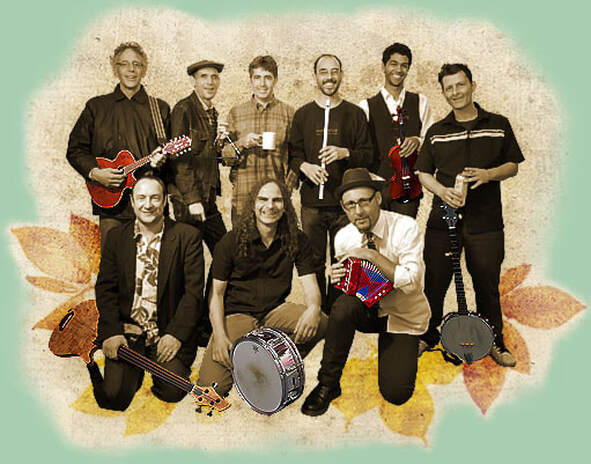 MUSIC
I studied classical piano for 11 years and, although I remained deeply engaged with (and passionate about) music, from classical to baroque, contemporary, jazz, reggae, world folk…once I’d stopped going to piano lessons, I didn’t touch an instrument until I discovered the accordion, fifteen years later.  I formed the trio Street Accord with fellow accordionists Deborah Handy and Eleanor Gib in 1986. Deborah and Eleanor were already accomplished players, and were generous enough to allow me to ‘learn on the job’ as we gigged around the country. We had a great time, playing at political protests and swanky venues, from Queen Elizabeth Hall (1987) to Glastonbury (1988), WOMAD (1988) and the Pompidou in Paris (1989).
After the demise of Street Accord, I moved to Nottingham, where I spent time playing in several bands, including Wholesome Fish (folk/punk/Americana)...

Café con Brio (from cabaret to opera, with singer Angela Warren)...
​Zaboomba (Latin American), Cyril Seaton’s Cycle roots (Dada cabaret and live art, with Simon Withers and Gareth Jordan), Nottingham School of Samba, Banda Samba Wamba, Rubaiyat (middle eastern, with Sherry Nik) and Fen Funk (contemporary street bateria).
I came across samba for the first time whilst participating in the National Street Band Convention in Bristol, in 1987. Deborah, Eleanor and I were rehearsing in the Folk House when we were distracted by the thunderous sound of the bass drums emanating from the gym next door. Curious, I nipped up the alley to the gym On  opening the door I was enveloped in a tsunami of sound, the like of which I’d never heard before. I was more than happy to be borne away by it, and I’ve been surfing that wave ever since!
In 1994 I formed Samba Wamba carnival arts company with fellow sambista and composer Mat Anderson.  We raised carnival troupes and baterias all over the UK and beyond. We also did a good deal of corporate training in sunny climes. It was great fun, but we decided to wind up the company in 2004. We always aspired to move the company in a more creative direction…less processional sculpture, more installation, less samba-reggae, more contemporary composition, fewer community centres, more art galleries…  Given that we had spent a decade building our reputation (as a carnival arts company) it was hardly surprising that the world wasn’t interested in paying us to do anything other than that for which we were already known. So, we split whilst the going was good. I continued to offer workshops in samba and ‘world music’ (and still do!), as well as raising the occasional bateria and continuing my training, with the likes of Dudu Tucci, Ravin Jeyasuria, Zee Allan and Olodum.
I played with the middle Eastern band Rubaiyat for a year and a half, and that was quite an education. I’ve always loved middle eastern music and it was a privilege to play with the musicians, who came from Iran, Iraq and Turkey.
At about the same time I joined the Mortimer’s Morris Band, first as percussionist, then (for several years) as accordionist, and, for a while, musical director. I left ‘Morts’ whilst preparating to move to  Belper, but I remain a huge fan of their Anglo-French dance music.
I’ve recently established a street band in Belper (Belper Boom!), and I’ve been commissioned by Fleet Arts to work in every school in Belper during the Spring, Summer and Autumn Terms 2022 and into 2023. ‘Street Beats’ performed in the Market Place in Belper in May 2022, as part of Belper Arts Festival and in August as part of Pride (very proud of Pride in Belper)!
I’m still playing with Zaboomba, Café con Brio and Fen Funk…and I love to both play solo and to throw (folk, Latin American, experimental, samba…) bands together for specific occasions. 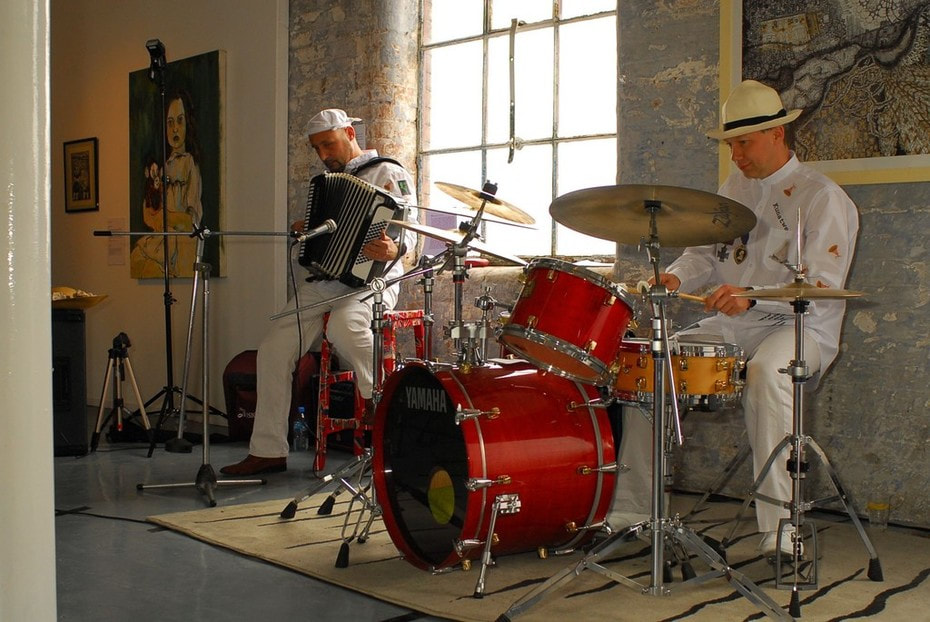 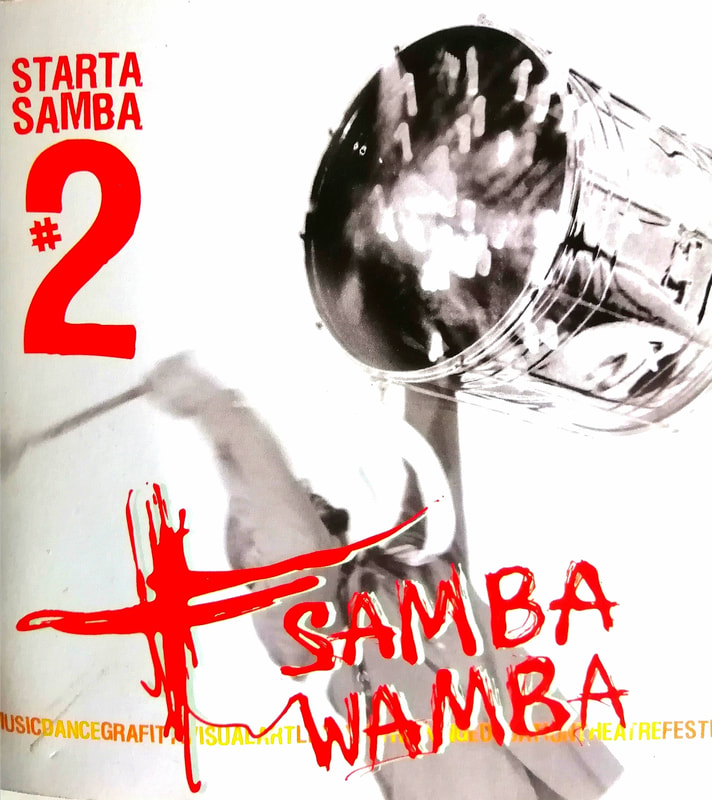